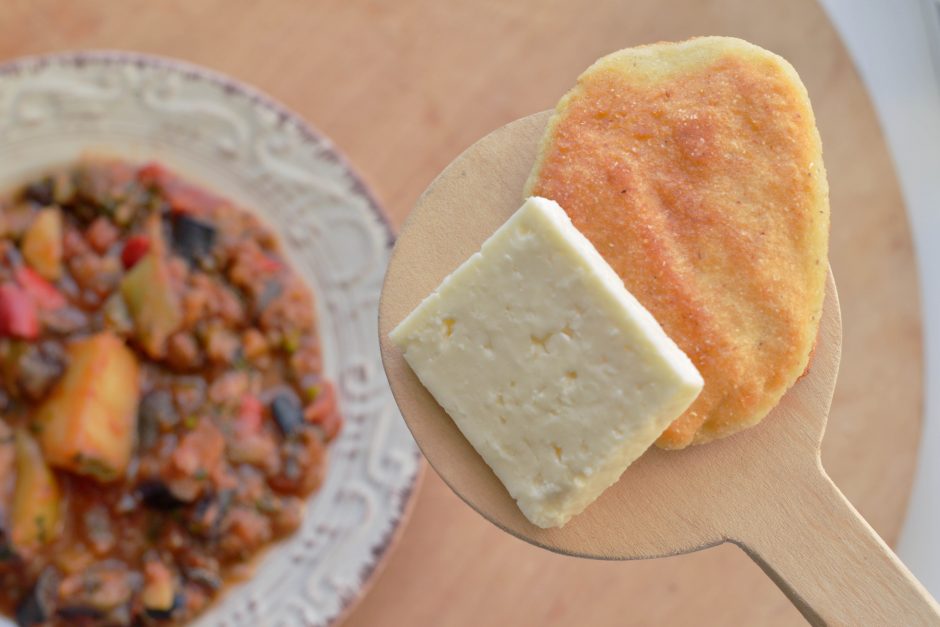 More From This Chef »

1. Take a bowl and mix maize flour and salt in it.

2. Pour hot water slowly in it and toss well for making a softly thick dough.

3. Take into account that dough must be softly thick and not thick and dry.

4. Heat the pan on a medium fire and pour some oil in it.

5. Make small balls, lightly roll it in your hands.

6. Put the maize buns one by one in the pan and fry from both sides (up 1 minute for each side).

7. You can also bake them in clay pots, where you put in maple leaf and then put the bread to bake either in an ordinary oven or wood oven.

We know maize bread, cornbread, pone, Indian bread or any other bread made from maize, corn . . . but what I am going to tell is not about just a cake or bread from maize, but about tortilla-like dishes largely spread in the west of Georgia and warmly embraced by the entire country. One may ask, if maize was introduced in XVII century, in Georgia, then how come that maize bread is a kind of a traditional serving in Georgia. The question is quite reasonable. The thing is that, maize can be traditional for the country of its origin, and for the rest of the world the method or ingredients of its preparation; presently, we meet maize in almost every country, people make various things from corn, but all of them are exceptionally different from each other by ingredients, preparation method and taste, of course. So is the Georgian Maize Bread with cheese, called TCHVISHTARI in Georgian. Both Mchadi and Tchvishtari are highly recommended with cheese, various salads, especially with Greek salad.
Recipe Type: Bread & Doughs, Vegetarian Tags: baking, cheese, Chvishtari, corn, cornbread, georgian cuisine, imereti, ingredients, maize, maize bread, Mchadi, Mtchadi, pone, samegrelo, Tchvishtari, traditional, west Georgia, wood oven