Czarist and the Soviet Cuisines

In my introduction, I promised to discuss the Czarist and the Soviet cuisines, two poles in many countries, or how things went starting from rich and bourgeois to simple and poor cuisine.

When I was in my early teens, I spent my school summers in the villages of my parents. Apart from the cookbooks, my grandmothers used to make notes about food, write down interesting recipes, and collect from the neighbors and friends as well. These cookbooks I found in the village were very diverse and for me, as a child, it was very strange to understand. Namely, I saw the difference between the books, but I didn’t know why, or what was the cause of such a dramatic transformation. In some cases, I was pretty much astonished reading the recipes with strange birds, and animals I’ve never heard of other than in zoology books, besides, the volume of ingredients in the recipes was a really shocking experience.

In the post-revolution country, poverty reigned; they adapted the kitchen for the majority, for the mass. It was the people’s kitchen from then on. They either replaced luxurious ingredients with something more available, or they just forgot it. For example, wild birds were mostly replaced with chicken; the caper was replaced with pickled cucumber, etc. They laughed at the bourgeois cookbooks. How on earth a person living on a salary, hardly finding a job, and living in a basement could find about 150 eggs to make Paska – an Easter bread?  Total nonsense.

Post-revolution time, wartime, and post-war time dramatically changed the picture. Hunger games went on. However, before that poor people were eating porridges, cabbage soups and food remains of their masters, while the meal of the rich and noble people consisted of several courses.

“When an unexpected guest comes, send a servant down into the cellar for hazel grouse or a ham”

This looks funny and bourgeois even now.

The book was first published in 1861 and since then it has been published 29 times in her lifetime. Each time she revised the book and added new recipes. For example, when the tomato and potato were introduced to Europe, there appeared new or modified recipes in the book and in every cookbook, obviously.

It should be noted that French Cuisine significantly dominated the Czarist Cuisine. Many Russian Czars had French chefs.

The Cookbook of Georgian cookbook author Barbare Jorjadze was first published in 1874, thus, I have a reasonable doubt that she followed the book of Elena Molokhovets, as there was close contact with both France and Russia then. And it was obvious that apart from many things food was also shared.

I was born in 1981 when my country was still a member of the Soviet Union. I do not remember much, but I do remember what kind of food we ate either in kindergarten, at home, in the hospitals, camps, or when visiting friends or relatives.

Apart from the survived traditional dishes Khinkali, Mtsvadi, Khachapuri, Kvarabia, Khashi, Kharsho, Lobio, and other meat dishes, the everyday feast was boring. Either in kindergarten or at homes, there were served simple soups, cabbage soups (Borshchi), pastries filled with potatoes, cottage cheese, roasted potatoes, boiled potatoes with fish, kotleta and mashed potatoes, kotleta and cabbage salad, also numerous varieties of grain porridges. Cooks and chefs were all called [povar], they worked routinely, as a factory, making everything in the giant stockpots.

Then the Soviet Union collapsed, this monster was dismembered; as a result of it, each and every member-country continued life of its own. It was a hard time for almost every post-soviet country. Hardship, food shortage, long lines for bread, and other products (if there were any) were part of everyday life. Apart from that, everything turned upside down by the Russians and we were in civil and local ethnic-separatist wars.

As I mentioned, we had villages, my grandparents were young and healthy, working hard in their orchards, gardens, growing numerous vegetables, fruits, breeding the cattle, and other domestic animals. Thus, we had all the necessary things, even during hardship.

And yet again, these luxurious cookbooks still looked like a masterpiece of the fantasy genre. The voice of the book was full of money. The money – a very rare thing at that time.  Years went on, the governments have changed, the economy flourished, people started to improve their economic condition, their lives in general. The country developed in a good way. Other than that, the chance of traveling, and also the internet played a huge, tremendous role in developing and exploring local cuisine.

In a nutshell, both female authors were from a noble family. Thus, they had the opportunity to receive education and also had time to write the book and then publish it. Their role is big, apart from the recipes; both cookbooks include tips for house management, how to save money for the family, and how to choose products, utensils, meat.

Today, the old recipes are being restored, renewed, and adapted to the existing reality. Many chefs, restaurants try to introduce new dishes to their guests. An interesting process is going on. We also started to explore our regions, wake them up, look into old recipe-notes, and make TV shows about local, traditional forgotten dishes. 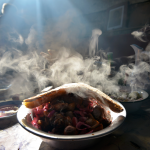